Get into the groove: DJ Mag Ibiza meets Groove Armada

Tom Findlay and Andy Cato’s Ibiza is one of endless possibility, forgotten memories and an Interpol-raided ostrich farm. We catch up with the superstylers ahead of their Elrow show at Amnesia to find out what the White Isle means to them...

For 30 years, Groove Armada have been coming to Ibiza. The island’s constant state of flux has led them to experience the rise and fall of legendary clubs, parties and scenes and as they gear up to play Elrow this season at Amnesia, we wanted to get their take on where Ibiza is, where it’s going and how Elrow is a force for good on the island...

What were your first Ibiza experiences before you started DJing here?
Andy Cato: “Mine was in the summer of 1988, I came out because my cousin was in a collective that was throwing parties here. I was pretty green around the ears, and I had a few memorable — or not so memorable — weeks. I’ve been coming every year since.”

Who did you see play at the time?
Andy: “The first time I just went to my cousin’s place, but the first time we actually DJ’d was a long time after that. I was with friends and we’d been booked to play Amnesia, and the promoter never turned up. This was the days before credit cards and before mobile phones — we agreed to meet the promoter on the rocks that’s now Café Mambo, but it was just rocks back then — and they never turned up. There were no gigs, no money. So we ended up camping out at this ostrich farm in San Antonio and another couple were there. We were just foraging and shoplifting, wondering how to get some money to try and get home. I was making mixtapes because we had decks with us — hopelessly naïve — to try and get some gigs somewhere. One night, Interpol came and raided the farm cause the other couple were acid dealers. They got hauled off and we legged it. We met some guy from London on a beach and borrowed some money from him and then honoured our debts about a month later.” 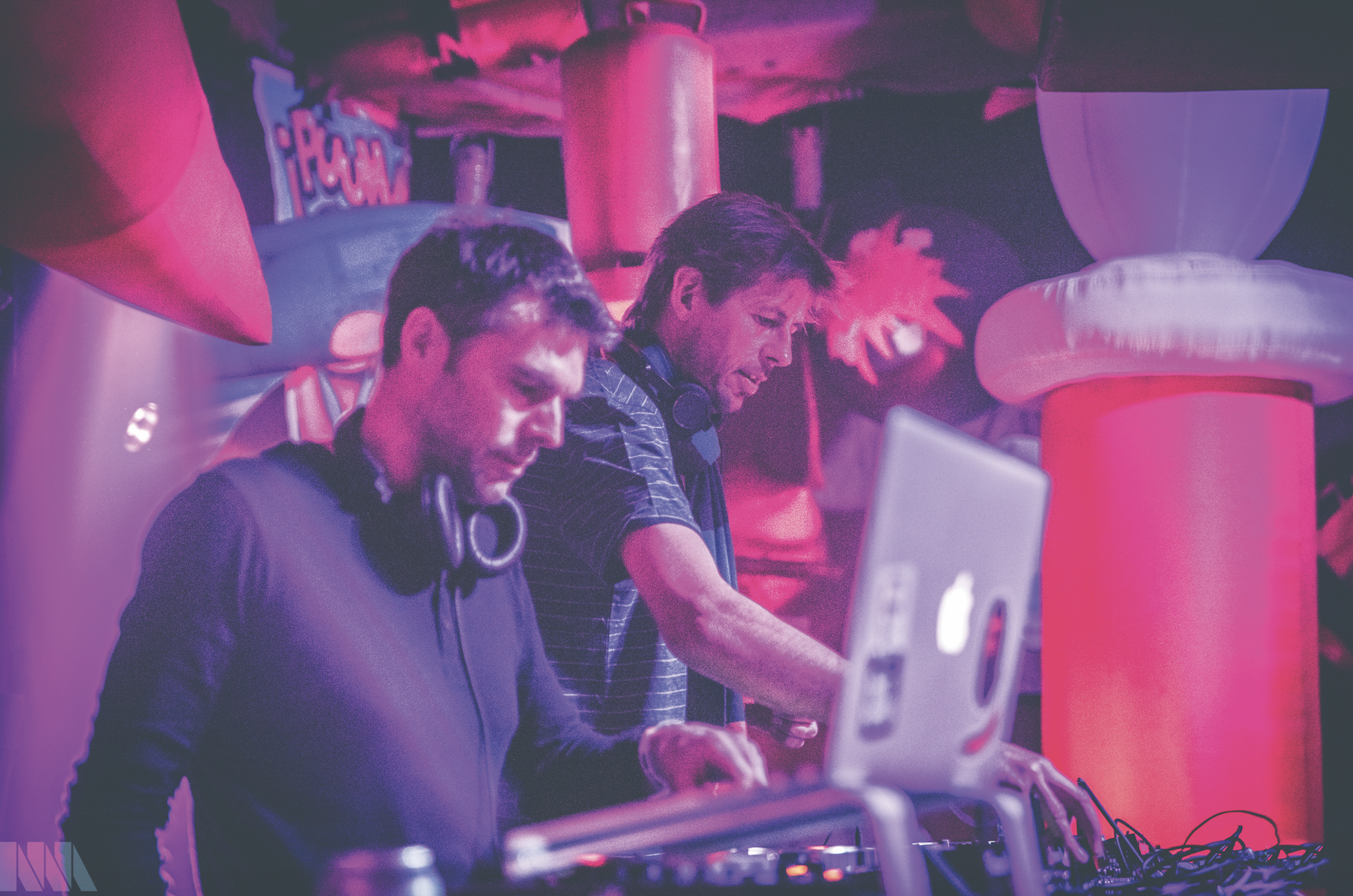 That’s a strong Ibiza story! When did Groove Armada first play on the island?
Tom Findlay: “The first time we played would have been Manumission Motel, which was also my first experience of the island — and it was a real eye-opener. I came more from the soul and funk backbone, so I was playing smaller basement parties before then. It was an amazing time — surrounded by strippers and kind of mad sexuality that was completely normalised living in that house.”
Andy: “That was a real peak of what people think of Ibiza — the best part of Ibiza — it actually happened then. You were resident at Manumission for a week and you’d play the club at the bottom of the Motel every night. I can’t even begin to describe some of the characters in that place. As we left, the next people who were residents were Primal Scream. They turned up to do the same thing that we’d just done and they rolled in like, ‘Ah, fucking hell, I forgot all my record boxes!’ and Mike [McKay] from Manumission was like ‘Ah, doesn’t fucking matter’. Another — totally forgotten — memorable week.”

In terms of musical evolution on the island, do you feel you can experiment here, or is it more restricted to the ‘Ibiza sound’, whatever it might be that season?
Tom: “What’s interesting is that when we started there was more of a sound you heard across every club. There were fewer records around simply because they were physical, and the same people would be going to the same markets and record shops. Now, we’re playing Elrow, we’re playing Ushuaïa, we’ll be playing at Hï for Glitterbox, ABODE too, so it’s much more of a distinctive scene — so you have to work a little harder, which is no bad thing. It would have been an impossibility back then because you’d need a record box with 300 vinyl in it.”

In terms of Elrow, what makes it a special party for you guys to play?
Andy: “Playing there was a big change for us — in the beginning because we used to get really frustrated with the lighting in clubs, so we re- designed the DJ booth so that when we play, we’d take control of the lights. It’s wicked, and it’s super-effective. So then when Elrow came along, they said ‘Not only can you not control the lights, but it’s gonna be super-bright’ because it’s based on a daytime concept. So we were unsure how it was gonna go but when we played it in Bristol, I became a total convert and it went off. You realise that when it’s super-bright and everyone can see each other, you get back to the roots of all this stuff. It’s meant to be a moment of togetherness, which is getting harder and harder to find. So that was a really special gig.”
Tom: “I really love the production stuff they do. As I already said, there was this hyper-sexualised aspect to Ibiza at Manumission, and of course it’s still there with the girls dancing on the plinths and it appeals to a certain crowd, but there’s also something quite tawdry about it, especially as clubbers are getting a bit older and the clubs are getting more VIP.
“Of course Elrow is sexy — everything about dance music has a certain amount of sexuality — but it’s not about staring and it’s not about half- naked women. There’s something really lovely about it. The first time we played, there were two girls running around dressed as two giant bits of toast being chased by two giant eggs and I just thought, ‘This is so much better, and it’s so much fun.’ Plus, with the whole #MeToo moment that we’re living in now, it feels much more relevant.” 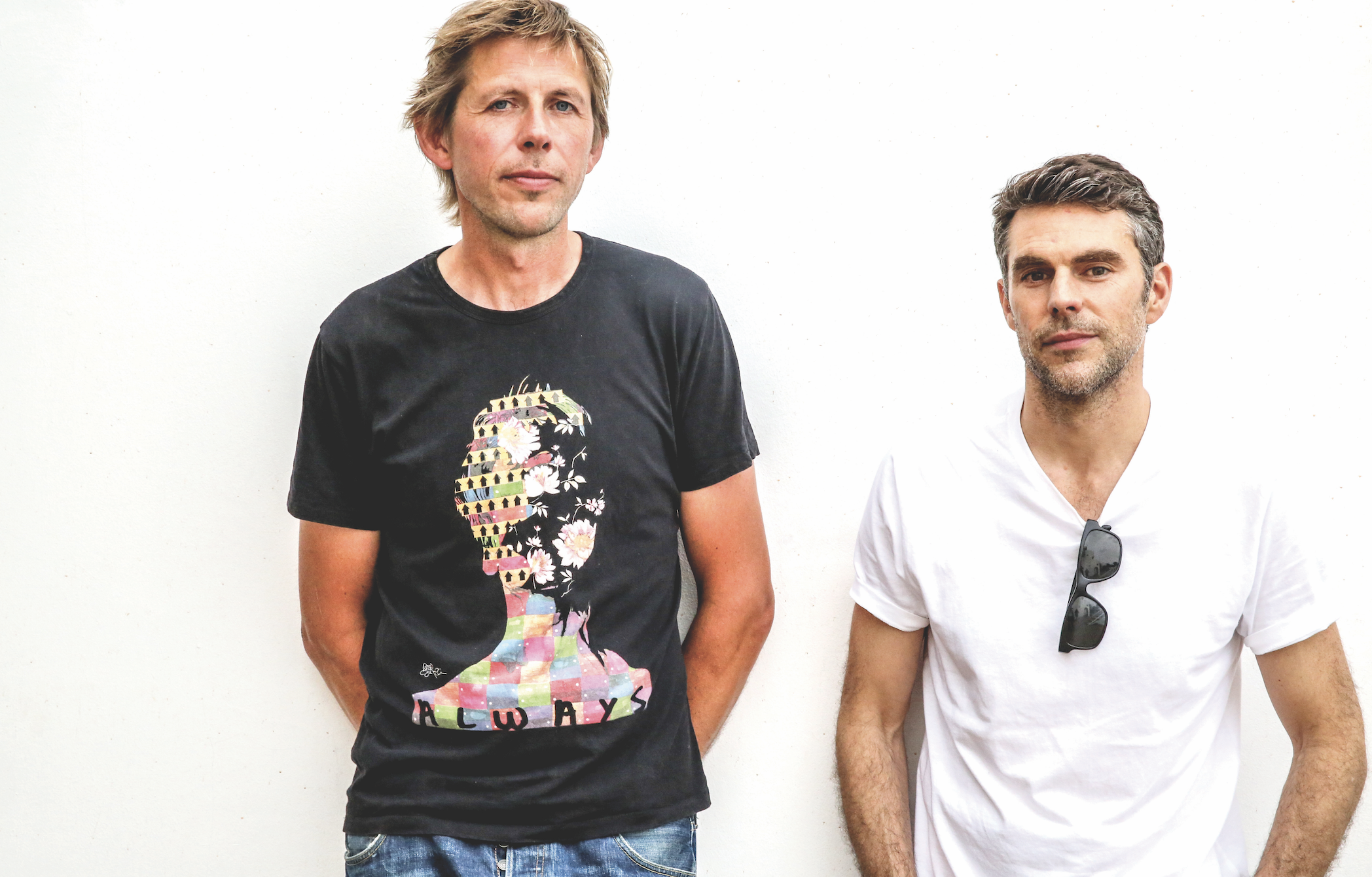 Going back to Ibiza, is there anywhere you go outside of clubbing you really love?
Andy: “There’s been eras of different places. For as many years as I can remember, every time we landed we went to The Rock Bar [Ibiza Town] — that was the first port of call. The amount of times we’d be sat at the Rock Bar watching the parades clubs used to do, meeting some amazing people, and there’s that feeling in the air of ‘Anything is possible tonight’. A great, great feeling.”
Tom: “The next era was at Es Vive hotel, those were the wild years of Groove Armada, but a lot of fun. Like Andy said, it was an almost dangerous sense of possibility in the air.”
Andy: “Once or twice a year for a special occasion, there’s a restaurant called Es Torrent and we’d go there with a big table of mates, and it’s the best restaurant in the world in my opinion. We’d be sitting there, eating this amazing food, and there was always a feeling of ‘The night is young’. With the arrival of a lot more money in Ibiza, those things are now almost out of reach.”

Do you still get that feeling now when you land on the island?
Tom: “Oh yeah, we feel it for sure. It’s always there. What’s so lovely about it is the cast of characters. You come back to Ushuaïa and it’s the same faces, same crew on the lights at Hï as Space, same crew on the sound, it’s lovely to see them again, another year goes by.”

If you were going to recommend anything to someone who just landed on the island for the first time, what would it be?
Andy: “When I first started coming here, I literally had a tenner. And you could make something happen. You could find a cheap place to stay, you could feed yourself for nothing, and you could have a few cheeky pints. It is harder now and I really take my hat off to the people that come here every year because without them, there’s nothing for us in the booth. My advice would be more to Ibiza: ‘Those people are the lifeblood of everything. All the red rope, all the champagne, all that bullshit is based on people who work hard, they’ve got one week in the sun and they chose to do it here’.”