Coyu: More than meets the eye

Coyu might be best known for techno and house, but as his debut album confirms, he won’t be pigeonholed

Seven years after breaking ground on his debut album, Spanish producer and DJ Coyu has finally unveiled his latest LP ‘You Don’t Know,’ which showcases his far-flung sonic palette across 16 genre-crossing tracks. The robust album, released on Coyu’s own Suara label, twists and turns through trip-hop, garage, house, drum & bass, and ambient, which may come as a surprise to fans who are used to his propulsive techno beats. Coyu designed this variegated smattering of sounds as a vessel for dismantling the preconceived notions fans have used to pigeonhole him, hence the album’s name ‘You Don’t Know.’

“People think they know me, but they just see a face, some tracks or some sets of mine,” Coyu says. “They just see a slight side of me, not the whole package. I’m sure people will be surprised after listening to the album, and the genres that don’t necessarily belong to what the scene and the crowd think I’m able to do.”

Although the album is largely a mosaic dissertation on Coyu’s all-encompassing tastes and production prowess, ‘You Don’t Know’ still offers up a handful of the techno productions that he’s built his illustrious career upon. The celebrated selector first started working in music at 18, when an injury shattered his dreams of playing soccer professionally. He tried his hand at every facet of the business, from writing for esteemed music magazine Trax, to coordinating public relations for parties, and driving DJs from the hotel to the club. Soon he was hosting radio shows, handling talent buying, and promoting his own parties, which gave him the perfect platform to develop his own Coyu project.

Since pursuing his Coyu moniker full-time, the perennial talent has remixed legendary acts including Fatboy Slim, Joseph Capriati, and Pete Tong & John Monkman, as well as released his own original chart-toppers like ‘Balls,’ ‘Y.E.A.H,’ and ‘El Baile Alemán.’ His unrelenting DJ sets have touched down on the stages of Sónar, Ultra Music Festival and Piknic Electronik, and he even had his own Ibiza residency. As one of the most prominent proponents of techno, it’s no surprise that fans have come to conflate Coyu’s name with deeper, growling sounds.

When he’s not busy writing his own music, Coyu is scouting talent for his Suara record label. He began Suara as a sub-label of his original imprint Atypical Farm, but after a few years of running both simultaneously, Suara grew so exponentially that Coyu decided to focus all of his efforts there. Suara is a platform for Coyu to support techno and house music he believes in, with releases from names such as Green Velvet, Charlotte de Witte and UMEK helping the label to rank number one on both Beatport and Resident Advisor charts at different points over the years. Suara is also where Coyu shares his passion for cats with the world, which is reflected in the label’s feline-inspired artwork. Coyu is affectionately known as “Big Cat,” and Suara’s tagline is “All About Music…and Cats!"

"Four to five years ago, I was too afraid of what other people could say about my music"

You Don’t Know
Coyu began producing for his debut album in 2012. His studio work was confined to his home in Barcelona, where he feels comfortable, relaxed, and inspired. Considering his break-neck international tour schedule, his studio time was limited, but that’s not what was holding up the album.

“Four to five years ago, I was too afraid of what other people could say about my music,” Coyu says. “But not anymore. Nowadays I can say I’m very secure and confident about all the steps I take as an artist.”

Out of the hundreds of songs Coyu produced for the new album, the 16 tracks that made it onto ‘You Don’t Know’ best represent his dynamic musical tastes and styles. The album flits across all corners of the dancefloor, kicking off with the title track, featuring a dramatic, introspective monologue from Lazarusman that asks the listener to question what they think they know. The patchwork album then careens between gleaming house grooves and torpedoing bass, cerebral harmonics and percolating acid synths, rumbling percussion and driving vocal samples, club-ready janglers and languid listening meditations.

“This is how an album should be; excerpts where you can lie on a bed to think, dream, relax, or even sleep, and other parts where you would love to be dancing alongside 2,000 people,” Coyu says. Halfway through the album is a collaboration with dance music icon Moby titled ‘I May Be Dead, But One Day The World Will Be Beautiful Again.’ The track is a woozy dream state of filtered synth work and breakbeats and is only the latest collaborative effort between the two artists. Coyu’s 2016 remix of Moby’s ‘Natural Blues’ marked a watershed moment in the Spanish talent’s already-impressive career, which was followed by Suara curating and releasing a seven-track Moby package in 2017.

“Moby is not just my favourite artist ever, but an inspiration,” Coyu says. “His albums ‘18’ and ‘Play’ are my two favourite albums ever — I’ve played them each a few million times. Collaborating with him and making him part of my album is a dream come true.” 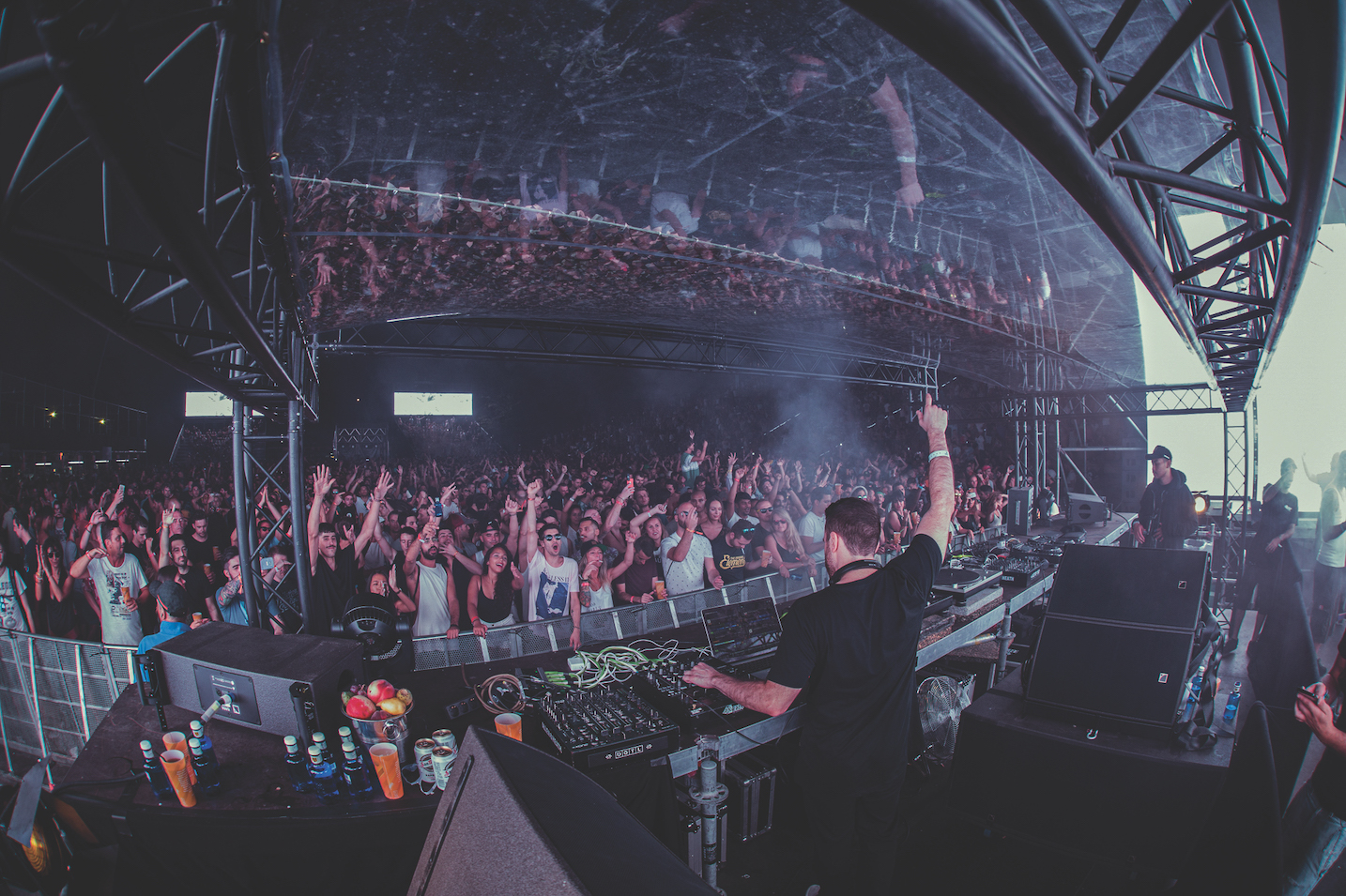 "I’m here because of the music, and for the music, not to please everybody and become rich"

The Big Cat
‘I May Be Dead, But One Day The World Will Be Beautiful Again’ is a melancholy song written by two animal lovers about the cruelty of humans, and the changes the artists wish to see in society. Coyu’s love for all things feline is not only reflected in the Suara label artwork, but also in the Suara Foundation, which Coyu launched in 2011 in tandem with his veterinarian girlfriend to offer better living conditions to the street cats in Barcelona. The Suara Foundation provides veterinary care for the cats, then houses them in their brick and mortar headquarters, where the cats can acclimate to the adoption process. A physical store opened in 2016 in the trendy Barcelona neighbourhood of El Born, and features two floors of eco-friendly fashion, Suara releases on vinyl, and of course, a plethora of adoptable cats.

“It makes my work as a DJ a bit difficult since the expenses of the foundation are huge, so the money I could spend on digital marketing or PR I donate to save cats, but it’s 100,000 percent worth it,” Coyu beams. “I love them. They are fantastic sentient beings. They give me so much love and energy. I wish I could do more for them.”

Moby’s inspiration can also be seen in Coyu’s lifestyle, as he motivated Coyu to become a vegan two years ago. A scroll through Coyu’s Instagram profile will tell the story of a health-conscious artist who’s always on the road, and somehow manages to balance a plant-based diet with hearty helpings of peak-hour partying. A far cry from the typical techno DJ who trots around the globe hungover and sluggish, Coyu straddles life as an animal-loving activist while soundtracking sweaty warehouses and sourcing new Suara material. It all ties back to Coyu’s mission of showing his fans that there’s more to him than meets the eye, and that whatever he does next will stem authentically from his heart.

“Maybe I will release another album in a few months, or it could be possible too that ‘You Don’t Know’ is my first and last one,” Coyu says. “For now I’m not thinking about what is going to happen, now that the album has come out. I’m here because of the music, and for the music, not to please everybody and become rich. And my roots will always be in techno.”

Want more? Read our DJ Mag US interview with Illenium. BACK TO YOURS: COYU COYU: CAT WHO'S GOT THE CREAM