In support of his new EP, ‘Sensei’, out next month via Firepower Records, DATSIK will embark on tour with fellow DJ/producers, Crizzly and Virtual Riot.

DATSIK will bring a new high-tech production style to the 2017 edition named The Shogun. DATSIK states, "The Shogun stage is the next chapter and is an amalgamation of my wildest vision to date.”

Themed after his ninja culture fixation previously marked by his 2015 Ninja Nation Tour, DATSIK is continuing the motif with his 2017 tour dates.

He adds, “After touring with the Vortex, I've wanted to create something unique that will stand out from the rest, and embody what it is to be a rave ninja. We've got a ton of dope surprises waiting for you with this one, so get ready to have some fun! Can't wait to see you guys on the Ninja Nation 2017 tour!"

You can purchase tickets to the ‘Ninja Nation 2017 Tour’ here. 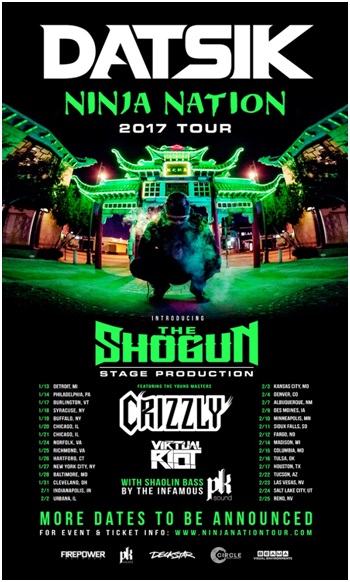